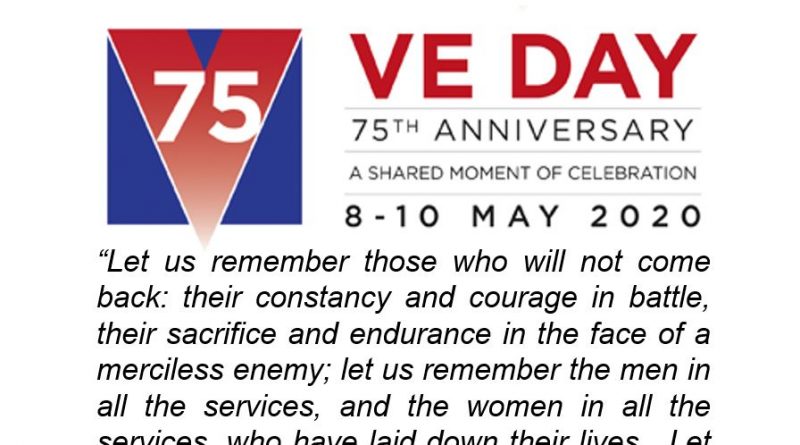 Highfield Park Trust had planned to hold a small exhibition at the Visitor’s Centre to mark the 75th Anniversary of VE Day on 8th May.  Sadly, due to the current situation, this has been cancelled but here is some of the information which we would have had on display.  It is rather fitting that we should be celebrating the beginning of the end of a prolonged period of hardship and for some sadness, as we too are living through difficult times at present.

“75 years ago the War was almost over.  Hundreds of thousands of people had already received a dreaded telegram.  But millions still had hope in their hearts.  Hope that they would soon be reunited with their loved ones”.

Winston Churchill announced the end of the War in Europe with a speech broadcast from Downing Street on 8th May 1945. He said “we may allow ourselves a brief period of rejoicing, but let us not forget for a moment the toils and efforts that lie ahead”.

For a few hours there were celebrations – fireworks burst in the sky, bunting adorned street after street and there was singing, dancing and much drinking.  To aid the celebrations Churchill had made sure there were enough beer supplies in London!

The people of Britain had something to celebrate as over the coming months 3.8 million British men and 400,000 women would return home.  After years of wartime restrictions, blackouts and bombing raids, there was relief and a readiness to commemorate finally being at peace.

“Let us remember those who will not come back: their constancy and courage in battle, their sacrifice and endurance in the face of a merciless enemy; let us remember the men in all the services, and the women in all the services, who have laid down their lives.  Let us salute in proud gratitude the great host of the living who have brought us to victory”.
An extract of King George VI’s speech broadcast on May 8th 1954 – Victory in Europe Day.

Research at HALS discovered the following, though we are unable to record the names under the terms of the General Data Protection Regulation Act as the information is less than 100 years old.   However, some of the staff at Hill End Hospital who were called up for Military Service in the Second World War included 5 Clerks, 5 Probationary Male Nurses, Kitchen Assistant, Junior Baker, 2 Labourers and 6 Stores Porters, one of whom was reported ‘killed in action’.  Additionally 2 Doctors – an Assistant Medical Officer and a Psychiatrist – also served.  The pathologist remained at Hill End until July 1944 when she was given one year’s leave to work with the British Red Cross in UNRRA (United Nations Relief & Rehabilitation Administration).

The Government requisitioned Hill End as a base and St. Bartholomew’s Hospital, London took over the hospital with 5 Sisters and 18 Nurses arriving as the advance guard.  During the war important medical advances were made such as the introduction of penicillin, plastic and reconstructive surgery.    In 1945 with the end of the War in sight, Hill End was anxious to return to its’ proper use as a mental hospital.  By 1952 there were over 200 Bart’s staff at Hill End and the final units of Bart’s eventually left the hospital in 1961.

To-date we have been unable to find records of VE Celebrations taking place at Hill End hospital though no doubt there was plenty of rejoicing.

Article written By Sue Gaylard Highfield Park Trustee, with thanks to The Royal British Legion and Mike Neighbour.