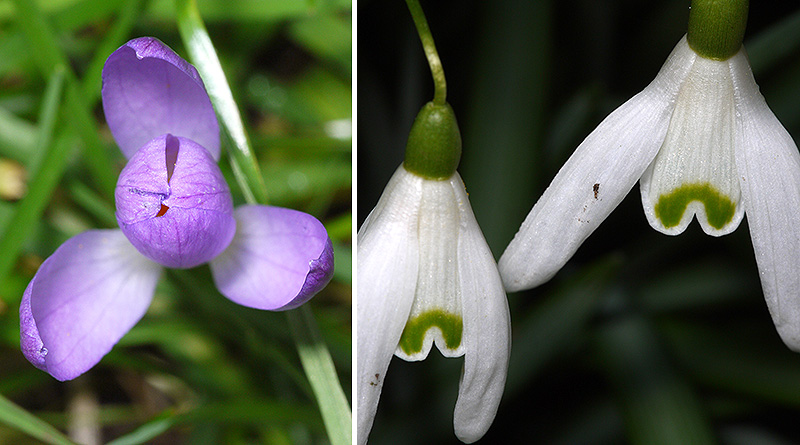 It is understating it somewhat to say that February was a wet-and-windy month, but life in the Park has been getting on with things, nevertheless, as it always does.

In last month’s column, a photograph of green, ripening Ivy berries was featured, along with a note that, once ripe, they would provide an important food source for Blackbirds and other birds in the Park. Sure enough, the berries are now the colour of black grapes, signifying their ripeness, and many clusters have already been hungrily feasted on, leaving few or no fruits.

Beneath February’s grey skies, various early-flowering plants have been adding colour to the Park’s grassland and woodland floors. Close-up shots of several of the more abundant flowers are shown below.

The woodland floor in February was carpeted, in several area, with Cow Parsley. The flowers of this plant’s characteristic umbels had already opened in a few cases before the month drew to a close.

While Cow Parsley does not support the same number of insects as does Hogweed, a similarly ubiquitous white umbellifer, it is a food-plant for the smart-looking leaf beetle Chrysolina oricalcia, which we were excited to find in the Park for the first time last June.

And it is not just the ground flora that is bursting into colour. Several trees and shrubs are also already flowering.

Foliage of a spring getting ready to happen

Finally, there are many reminders that Spring is just around the corner in the Park, with the foliage of our iconic Bluebells and the equally striking Lords-and-ladies already promising the glorious displays of flowers to come.