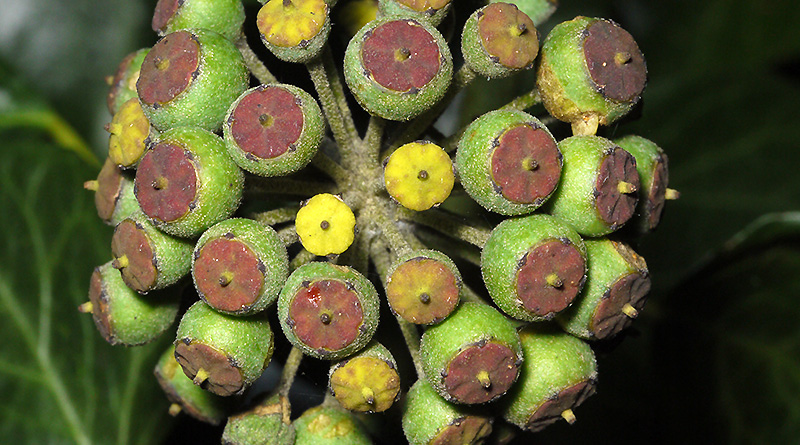 January is not June. Birds do not have young to feed. Bats and hedgehogs are hibernating. And few butterflies are on the wing. But there is still plenty of interest for the natural historian in Highfield Park.

One of the more striking events in winter, looked at up close, is the ripening of Ivy berries. The fruits of this late-flowering plant would have been pollinated back in the autumn, and they slowly ripen over the coldest months, going from pale green to purply brown and, finally, turning to the colour of black grapes. Once ripe, the berries will provide an important source of nutrition for blackbirds and other birds at a time of year when food is scarce.

It’s not just birds who benefit from Ivy, though. For instance, the plant provides a hibernation site and food source for many species of insect. These are all good reasons to resist too heavy-handed an approach to cutting back any Ivy that you might have growing in your own garden.

Plants of the understory

Other plants to pay close attention to in early winter are those that make a living in the woodland understory, for they have much to be getting on with before the summer canopy develops. Hazel is one such plant, and it completes its reproduction in winter.

Hazel trees bear both male and female flowers, but they cannot self-fertilize. The male flowers – drooping catkins from which pollen is released and carried by the wind – are the more obvious. The female flowers, which are minuscule in comparison, are bud-like and bear a cluster of mageneta-coloured styles to receive the male pollen. With choppier air currents and a relatively clear understory, winter is a good time of year to employ a reproductive strategy based on wind pollination.

From flowers where pollination is successfully completed, hazelnuts will develop later in the year, to the delight of the Park’s grey squirrels and other small mammals.

Another plant of the woodland understory that is noticeably active in winter is the Honeysuckle. By the time the crowns of the trees above it are in full leaf, there will be little light that reaches the woodland floor. With its leaves emerging in the winter, though, Honeysuckle is able to take in light while it is available. Given their pale brown colour you could be forgiven for thinking that the stems from which the leaves emerge were dead, but this woody climber is very much alive.

Later in the year, Honeysuckle will flower and provide an important nectar source for insects such as the spectacular Elephant Hawk-moth.

As attested to by the Botanical Society of Britain and Ireland’s annual New Year Plant Hunt, quite a number of plants can be found in flower in early January – some seasonally, some more uncharacteristically. Herbs that have been in flower in the Park so far this month include Chickweed, White Dead-nettle, and Shepherd’s-purse.

Other things to look out for

Some other things to look out for in the Park in January are pictured in the photo grid below.