This was founded in 1899 as the ‘Hertfordshire County Asylum’ (also referred to as ‘Hill End Asylum’). Between 1920-1933 it was called the ‘County Mental Hospital’ and was finally closed in 1995.  The Mental Deficiency Act 1913 was the first since the Idiots Act 1886 to acknowledge the distinction between those with learning difficulties (and learning disabilities from birth or an early age), and those who had otherwise become mentally ill and might be treatable.  The ‘mentally deficient’ remained amongst those at Hill End Hospital until Cell Barnes Hospital opened in 1933.  On 5th July 1948, Hertfordshire County Council surrendered the hospital to the newly formed NHS.

The main entrance to the Hospital (Asylum) was through iron gates at the top of Camp Road. To the right of the entrance was the Lodge, which still exists. On the left a detached house called “Hillside” was occupied by the Clerk/Steward.  Further along the drive (the line of Bramley Way) was the Medical Superintendent’s House, later (after the moving elsewhere of the Superintendent) called The Annexe, and later still called “Keeling House”.  Finally, the drive reached the entrance/administration block with a clock tower.  The entrance block contained a reception office, doctors’ offices and committee rooms.

“When I took on the job it was stipulated I had to have a hospital house. The lodge on the main entrance had a lovely enclosed garden/yard with 9ft wall round the back.  The wall of the stables formed the perimeter of the garden along Hill End Lane. Littlefields, later became Martinlea, stood near the Lodge and near where SPAR is now, was the stable block”. (HE Building Manager) 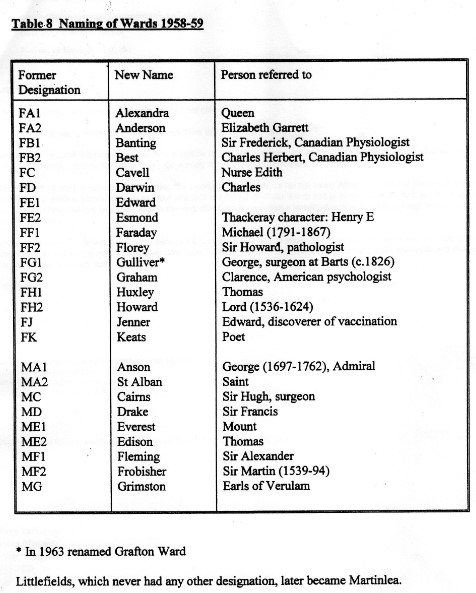 The Hospital contained seven male wards, with 256 beds, and eight female wards, with 308 beds. The male wards were on the west side of the Hospital and the female on the east, and the two sides were separated by a locked door intended to keep apart both male and female patients and male and female staff.  The wards were categorised as: “sick and infirm”, “acute cases”, “epileptics” and so on.  They were in two-storey blocks and were designated, on the male side, as MA1 (ground floor), MA2 (upper floor), MC, MD, ME1 and ME2.  The female wards were FA1, FA2, FB1, FB2, FC, FD, FE1, FE2.  In 1959 these designations were replaced by names of notable national and medical persons beginning with the same initial letter – MA1 became Anson, MA2 became St Alban and so on.

“Awful corridors going through those plastic flaps – whatever they are called. Can’t recall whether wards went off the corridors but they were mainly a link so the Porters could go through on trucks.  The corridors not conducive to well being – Mental Health units now would be spacious and airy.” (HE Care Assistant)

“I’ve got sad memories of Hill End Hospital. I’m afraid I had an aunt who was there and that was a bit of a scary place.  I used to go down with mum and dad on a Sunday afternoon but I always used to sit in the car.  Some of the wards were locked and there were long, long corridors.” (Young visitor to HE) 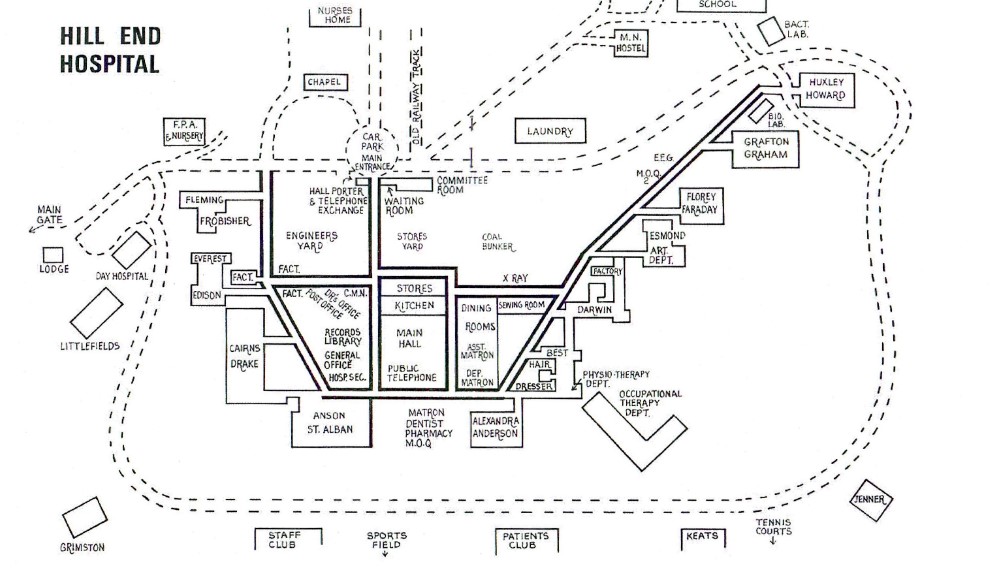 “Keys to the wards had to be guarded very carefully. One Ward for which I did not have access was Cairns Ward which was high security.  It was located near the Pharmacy which was run by Mrs Kendrick”. (HE Nurse)

“I thought the hospital was ideal though I did not like the locked up (secure) Wards (e.g. Grafton and Cairns).  There was a piano in the Edwards Centre – part of the art department.  As it was closing down and there were no clients there, I was asked to help shift a large floor to ceiling cupboard where stores were kept.  It revealed a door which led to a room with wash basins on one side on iron stands, a bath and a fireplace – ‘in a time warp’.  Were they used when the area was a ward?”. (HE Occupational Therapist)

“The Path. Lab was almost opposite Huxley Ward at the far end off a glass corridor.  I never forgave the authorities when they knocked down the entrance block and built Lynch Court – a parody with clock on roof”. (HE Senior Staff)

“Gulliver Ward (which was renamed Graton Ward in 1963) and Florence (Florey) Ward led off a very long corridor”.

“There was a tunnel, entered at ground level, through some buildings soon after you entered the main gate and straight ahead that led you round the narrow road to the Sports Club on the Village Green. I have no idea why it was there but padded cells were on the left as you came out the other side”. (Visitor to HE)

“The beautiful Theatre Hall was an amazing room with coats of arms in the windows.  Pantomimes were held there once a year and they were so professional.  There was room for a large audience”. 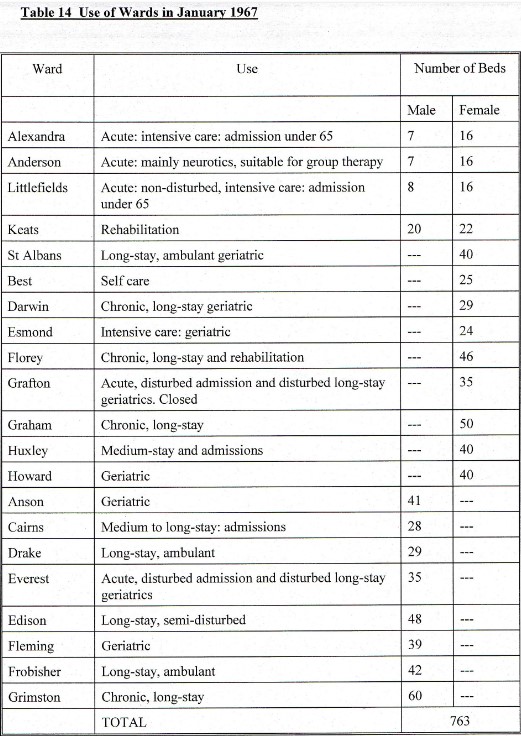 “Female corridor – Graham. Grafton, Florey and Faraday, Howard and Huxley, Esmond upstairs with Edward, Best, Anderson and Alexandra.  A corridor going into infinity”.  The hospital was very well built and we only had two instances of subsidence in Edison Ward and Florey Ward.  The therapeutic department was near Alexandra Ward. ‘Woodside’ was the Nurses training school”. (HE Estates Manager)

“We used to have to maintain the padded cells. Hull Rubber Company supplied the white rubber to encase the walls.  The worst male ward was Everest Ward. We used to have padded cells in each ward but we took them out except one on the male side and one the female side “just in case”.  The rubber was removed and room converted for another duty.  There was a need to control some patients until drugs were able to do the job.

The padded cells had aperture (2’ x 2’) above cornice line to let light in. There was concealed electric light in the ceiling.  The walls had nothing for the patients to grip.  The floor was raised so it drained into a gutter – a lead trough round the outside led to drain.  There was no furniture apart from blankets and a small mattress so there was nothing with which they could harm themselves.  It was horrible to see patients in the padded cells”. (HE Building Manager) 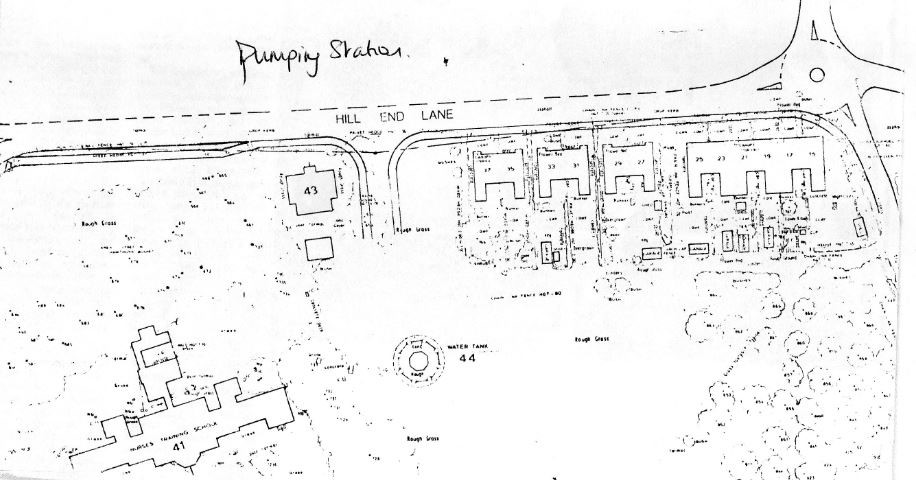 “Maintenance was stationed near the water tower off Hill End Lane next to the pumping station”.

The early 1980’s saw the building of a large central store on a site previously used by the garden department.

The NHS policy of care in the community came to be more fully implemented with the Community Care Act 1990 and a year later the new ‘Horizon Health Trust’ began its’ winding down of Hill End and Cell Barnes Hospitals.  The demolition of unused buildings began and in 1994 the erection of the first houses on the site started.  The buildings which housed Anson and St Albans Wards together with Alexandra and Anderson Wards still remain.