The Chapel (Trestle Arts Base)

The original Chapel was built in 1899 to accommodate the whole hospital population, with separate entrances for male and female worshippers (the two large entrance doors in Russet Drive). After 80 years this building was no longer ideal for the ageing and infirm residents.  Plans were made to equip a new Chapel, located in the sewing room in the main hospital buildings; the existing coffee lounge became a sewing room and patients’ clothing store with a fitting and display area.  The new Chapel cost £10,876, the work done by J.G. Mathews Ltd, and was dedicated on St Luke’s Day in 1979. The Old Chapel became a furniture store.

Taken from the History of Hill End Hospital, St Albans 1899-1995 by Brian Anderson

The heating of the Chapel had always been a problem. In 1947 the Committee decided to install gas radiators in the Chapel.  Some Committee members had doubts but the Chaplain and the Engineer visited a church with gas heating and were reassured.  So the Committee accepted an offer by the Watford and St Albans Gas Company to install the gas heating for an estimated £567.10s.  It was an unfortunate decision: condensation from the burning gas damaged the organ and the chapel fittings.

In July 1958 the House Committee agreed to create a small side chapel within the main Chapel, to accommodate up to 15 people. A sum of £143.10 was required for the altar, communion rails, chairs etc.  Heating would be by electric heaters, switched on when required.  The gas radiators in the main Chapel would only be lighted on Sundays, and from September to April only.  The new side chapel was dedicated to St Bartholomew.

In 1954 the Chaplain was the Revd. George Daulby but he left Hill End for a Cheshire parish in 1959 and was succeeded in October of that year by the Revd. Harold Beech. He was allocated a house in Hill End Lane*, the first mention we have found of the Chaplain being given a hospital house though it is possible that Mr Daulby had one.  The following January the House Committee agreed to spend £39 on vestments for the Chaplain and £44 on a pall and carpet for the mortuary.

*The Chaplain’s house, number 103 Hill End Lane, began to subside in 1974. After much discussion it was decided to demolish the building in 1978.

During 1959 the average number of communicants at services in the Chapel was 21 or so, with another 10 or more communicants at services in the wards. At Christmas there were 110 communicants.  Mr Beech reported that the heating in the Chapel was ruinous both to the fabric of the buildings and to the organ, which needed extensive repairs.  Also the Chapel, in appearance, compared unfavourably with the least decorative of the wards.  Nothing seems to have been done until 1979 when the whole building was abandoned and a much smaller chapel was created within the hospital buildings.

In January 1981 the BBC applied to the District Management for permission to film in the hospital in connection with a programme about ******, the patient who started the fire in the Chapel and who was then serving a seven-year sentence for this. The Hill End Management stated that they had no objection to the BBC recording interviews in the hospital but they rejected the idea of a discussion between two psychiatrists on the general question of the treatment of mental patients. 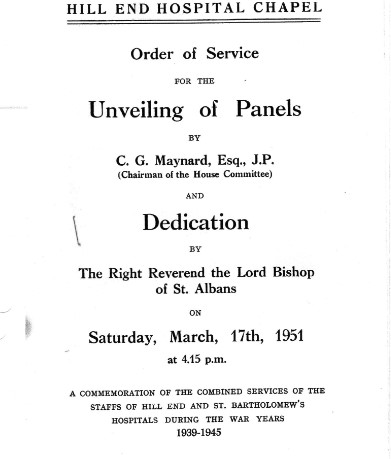 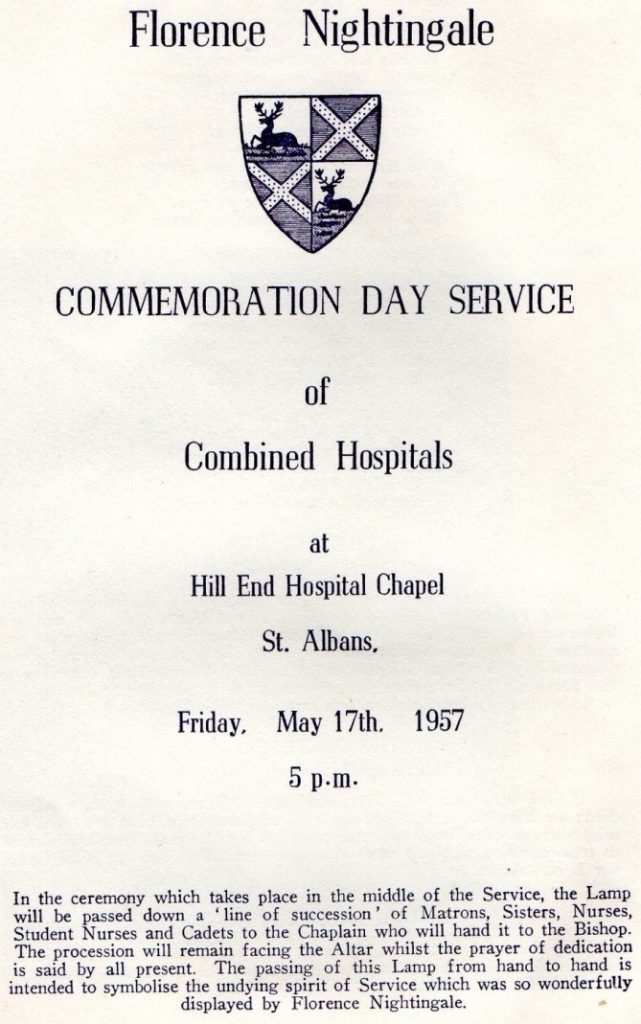 In 1951 a service was held at the Chapel (now the Trestle Arts Base) to commemorate the faithful service given by the staff of Barts and Hill End during the war years. The Dedication was by the Lord Bishop of St Albans. 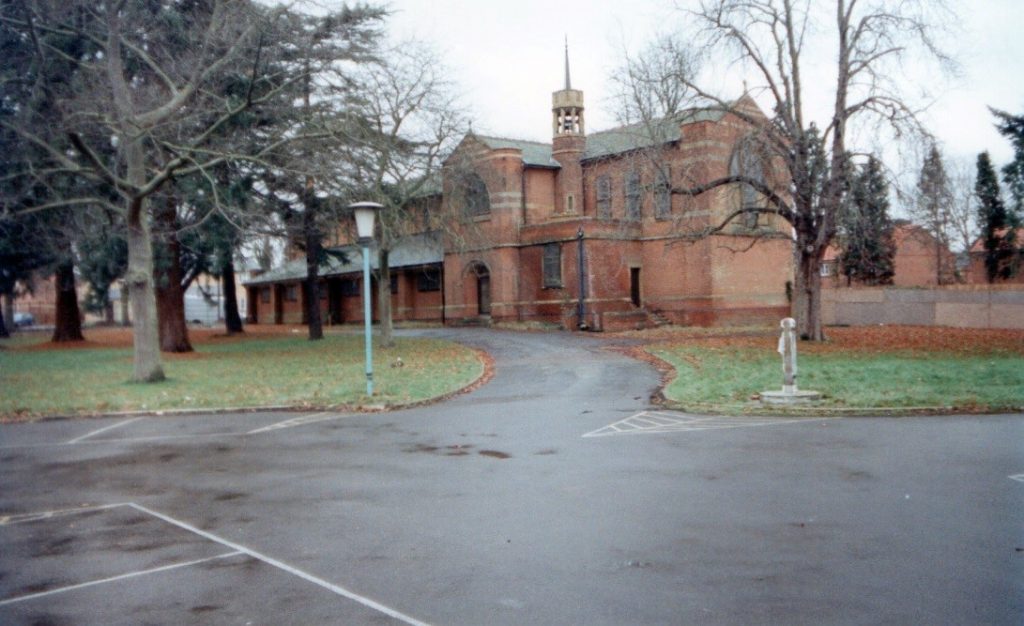 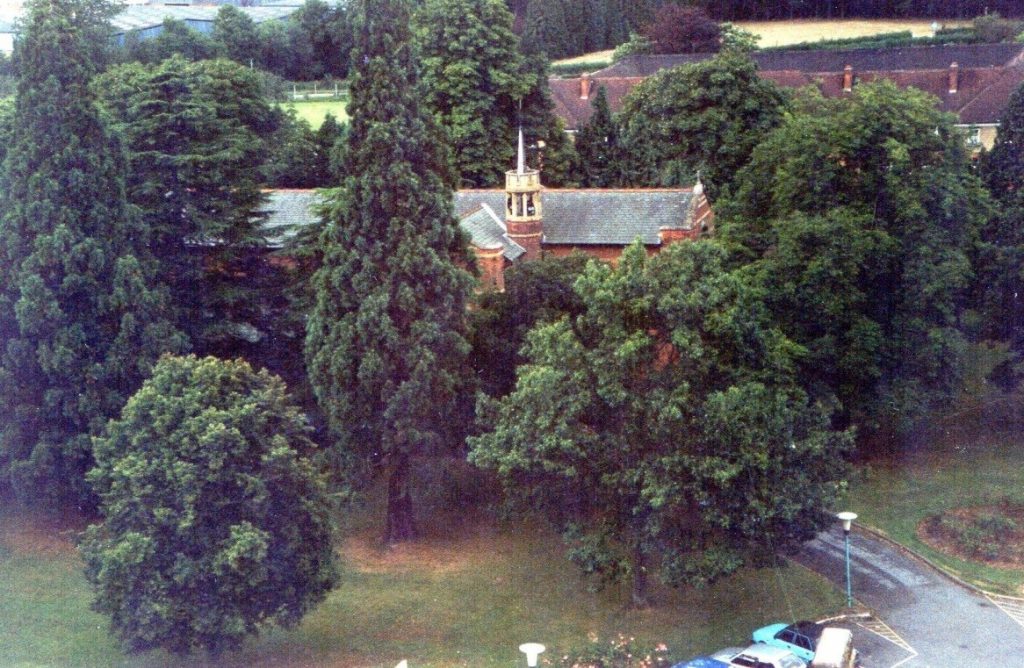 Another service was held in 1957 of combined hospitals to commemorate Florence Nightingale. In this service a lamp was passed down from Matrons, Sisters, Nurses and Students to the Chaplin and the Bishop for Dedication.  The passing of the lamp from hand to hand symbolised the undying spirit of service displayed by Florence Nightingale.  The lamp, which had been loaned by Miss Anna Neagle, was subsequently given by her to the hospital and was kept in the Chapel.

Trestle Arts Base was originally in the Birch Centre. They moved in 2002 after £2m refurbishment of the 100 year Hill End Hospital Chapel.  There was an Arts Council Grant of £1½m with Highfield Park Trust giving £100k for enabling works.  Sansome Hall Architects (M.K.).

“Out of Sight, Out of Mind” performed at the Trestle Arts Base on Saturday 4th July 2009.  The play charted the 100 year history of Hill End Hospital. 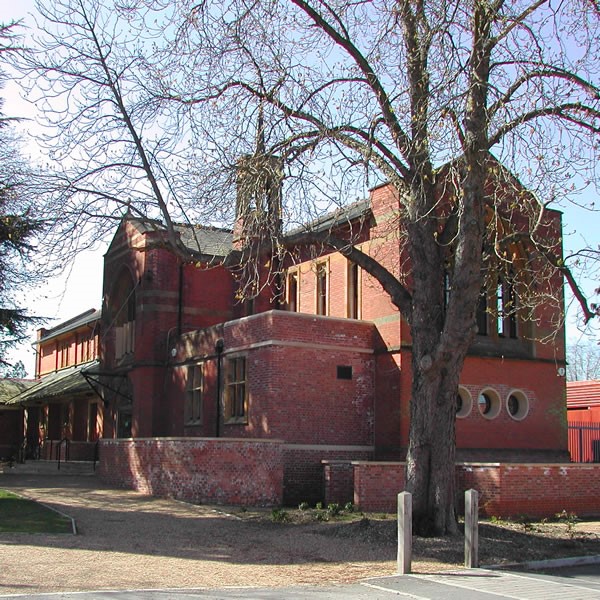