‘In view of the inadequacy of institutional accommodation for the mentally defective, the opening of a further colony is a matter of considerable importance. The Hertfordshire County Council has now, in the words of the Minister of Health, taken a place in the van of progress by the provision of Cell Barnes Colony, which was opened by him on the 5th October. Certified institutions such as this, said the Minister, are needed for the humane treatment of the patients; to give them reasonably decent living conditions; to raise them by treatment to such levels of improvement as their individual capacities will allow; to enable some to find places of usefulness in the social scheme; to give refuge to those who fail, and to be centres of scientific investigation whereby the present unsatisfactory amount of mental deficiency may in the future be reduced.’

There were two Lodges – East and West – at the main gates of Cell Barnes Hospital which was opened in 1933. Originally the two entrances were for girls at West Lodge and boys at East Lodge. Consequently, the Wards on the site were divided – male to the east and female to the west.

“I remember when the sexes were so strictly regulated that they even had separate entrances into the hospital – the boys using the Highfield Land entrance and the girls using the ‘kissing gate’ in Hill End Lane.” (Friend of Cell Barnes)

“There was a definite divide with male and female adults (‘your’ side of the hospital) but the children were not split. They were very separate and only came together for dances. When wandering round the grounds each would keep to their own sides.” (CB Sister)

“East Lodge was main entrance as you come down Highfield Lane. Only drive in via that route. First house as you go into Puddingstone Drive (the new one on the right) roughly on the site of East Lodge.” (CB Nurse)

West Lodge in Hill End Lane is the existing building while East Lodge was in Highfield Lane where Puddingstone Drive exits.

West Lodge was Mr Sharp’s house; he was the gardener before George Dollimore. The Head Gardener, George, had a passion for roses and some of the bushes rescued at the closure of the hospital are now planted in the Rose Garden opposite the Lodge.

“When I was young, Mr Dollimore was in charge of the gardens and it was all lovely cabbage roses – he loved roses and the hospital was devoted entirely to roses. The lawn outside West Lodge was like treading on velvet – fantastic grass.” (Daughter of CB employee)

West Lodge became a nurses’ home after the gardener left and then during the lead-up to the hospital closing, was used as a half-way house, to help groups get ready to go out into the community. 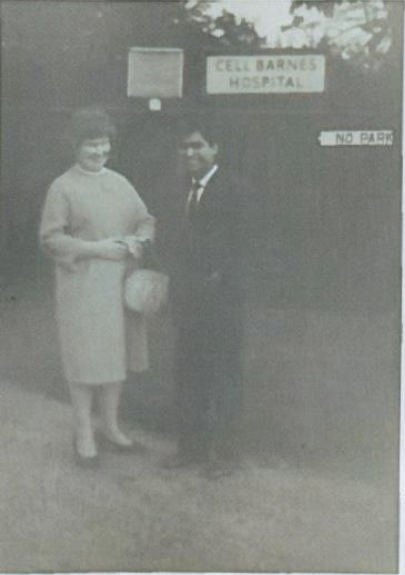 “Photo of my mum with male nurse Raj taken by the gates at West Lodge. The pedestrian gate and double gates were never opened and always chained together. If you had a car you came in via East Lodge.” (Daughter of CB employee)