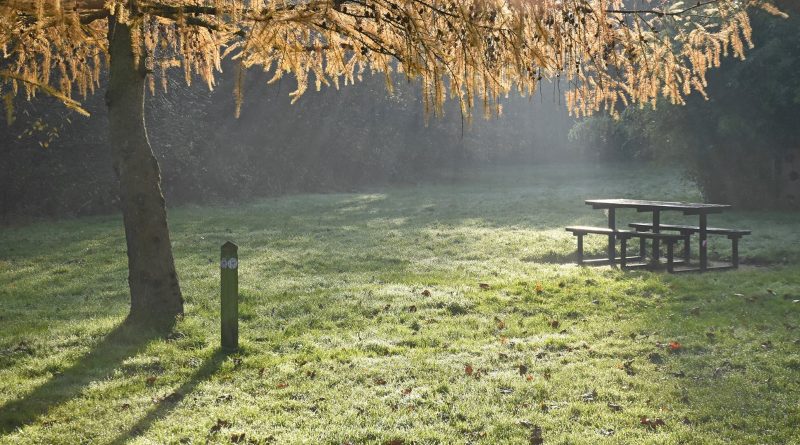 It seems to have flown past incredibly quickly but in 2021 Highfield Park Trust will celebrate its 25th anniversary.  Woohoo!

Twenty-five years ago the concept of establishing a charity funded park was rare. St Albans and District Council were monitoring events in Shenley and on the basis of the early success there, former District Councillor Sheila Burton approached John Ely, the driving force behind the Shenley Park project.

Thus John became the first Director of Highfield Park and was instrumental in its creation.

Although we have developed the Park significantly since his retirement, most of what you experience on a walk today can be traced back to John, whom we hope to welcome back to Highfield later in the year.

Probably the most significant addition occurred In 2012, when, with the support of Oaklands College, we were able to extend the Park by a further 20 acres and plant Hither Wood, a fabulous new Jubilee Wood.

Then, in 2018, we opened the Visitor Centre, our new home. Since being opened it has won several awards and in late November it was short-listed in the UK Grand Final of the RICS Social Impact Awards. Although we didn’t win, it was a remarkable achievement and needless to say we were all very proud.

Of course, the advantages to St. Albans and the surrounding areas have been immense and the whole community benefits from having a thriving new 82-acre rural park to enjoy.  Also, since the Trust is charity funded, none of our hard earned council tax is used to  support its work, enabling this funding to be used on other priorities by the Local Authority. The Park and the extensive programme of events that the Trust now  organises provide for significant community benefit and I don’t believe that SADC can have any complaints on how things have turned out!

Well, we’re not short of ideas and will be working  progressively towards many of them in the coming year.

As I’ve said many times before, we cannot throw   money at anything. Everything we do will take time, but over several years we will make a difference.

The immediate priority is to plan for the year ahead and a small team has been established to ensure that our 25th Anniversary is appropriately marked.

You may have noticed that our logo has been slightly changed and we will use this new version throughout 2021. Also, all our events this year will have a ‘silver’ theme to recognise the significance of the year.

We plan to hold a dedicated ‘25th Anniversary Event’, although more work is needed to establish how this will work and what it will involve. We have noted the desire from the recent survey to have more music in the Park, so I’m sure there will be music! We will also have a small display in the museum in November and I know that preparation work has already started for this. Special thanks here to volunteer Liz Jones, who is    creating an amazing ‘timeline’ of the history of the Trust. As you will appreciate these things take a lot of work and we are very grateful to those involved.

Last year I explained how that Trust sets its priorities for the year ahead and, at the time of writing, we are in the middle of this process, which will conclude at the January Board Meeting.

So, although some aspects are still to be confirmed, we have agreed on several actions already.

Firstly, we need to complete the new wildlife pond by the allotments. We made a good start on the sacrificial pond before it started to rain (and rain and rain). This made the whole area extremely wet, to an extent that we were worried about working safely with a  mechanical digger. This is a fabulous project for us and we’re keen to get cracking again as soon as the conditions allow. Hopefully sooner rather than later.

Secondly, we are starting to draw up plans for a new natural play area that will be situated between the Sunken Garden (behind the YMCA Community Gym) and the Village Green. If you recall, requests for a new play area came joint top of the 2019 survey, alongside keeping the rural feel of the Park.  Trustees will not under any circumstances compromise on maintaining the Park’s identity, so a natural play area seems the most logical step forward. Someone suggested that we visited the National Trust facility at    Dunstable Downs and despite a valiant attempt to do this, it was not to be. However, the Ranger we were due to meet provided us with lots of  informative reading matter, which means that we are now confident of making a start during 2021. Again I should set some expectations; it won’t be finished this year, but it will be started. Although our current ideas will cost a fraction of purchasing proprietary play equipment there will be some expenditure. Our team is small and can only work on the project as time allows. But they will make a start and Trustees have agreed that we will now have a yearly community fundraising theme and for 2021 we will focus on establishing this new natural play area.

In the Autumn we were able to establish a ‘Donate’ button on Facebook and collected £800 for a bespoke sculpture in the Woodland Garden. Subsequently we found it difficult to contact the wood carver and it eventually transpired that he was suffering from ill-health and wouldn’t be able to visit us. So, after some thought, we have decided to use the money to buy some hand crafted seats, that we will position in the new play area. They are very nice pieces that will set us off nicely.

Thirdly, we’ve agreed that we will host our own Forest School in the Park during the school holidays. Trustees have been toying with this concept for a while, since Forest Schools have proved to be such a successful   teaching method for primary aged children. The list of benefits is (very) long and we want to give as many local children as we can the opportunity to connect with nature in such a valuable manner.

To this end we have teamed up with Tanya Dickson, who runs her own Forest School business, CultureWood. We will run six  sessions over three days, each for fifteen   children, meaning that we can offer ninety places in total. Ideally we would like to offer all the places completely free of charge,  although this isn’t guaranteed at the    moment; we still have to secure another £400 in grant

funding to be able to achieve this, but we are hopeful and are now following up several potential sources.

There are other projects in the pipeline and I’ll come back to these as the year progresses.

2020 has obviously presented the Trust with several challenges but has also reinforced the importance of building as much resilience into our operating model as possible. If you recall, we’ve already lost the income from the aerial mast through no fault of our own, so we have to keep working and finding new ways to build passive new revenue streams.

I reported in the last newsletter that the income lost from the closure of the Visitor Centre and events would hurt us in the long run. Since then we were made aware of a Government scheme that we hadn’t realised we were eligible for. To cut a long story short, thanks to the efforts of Trustee and Cllr Jamie Day and Cllr Mandy McNeil we were able to secure some much needed support.

Despite all the turmoil we were able to host several bat walks and a socially distanced Apple Day, which worked very well, all things considered. We received a lot of positive feedback on the ’Giant Forage’ and in the end we sold more bottles of juice and cider than the previous year. Thanks to everybody who made the effort to turn out on a very wet day!

Trustee Joe Gray, unable to run his planned walks and talks on the flora and fauna of Highfield, created a short mini-series of blogs that can be found on the website entitled  “Autumn Colours”. Worth a read!

In recent months we’ve also been able to plant fifteen different, traditional variety apple trees in Cell Barnes  Orchard thanks to a grant from the Peoples Trust for Endangered Species and a kind donation. We’ve also planted three new medlar trees, again supported with a donation and another fifteen rose bushes for the Rose Garden.  Full details are on the website.

However, the Star of the Show during 2020 must surely be Freddie the Fox and his new friends. It has been great to see so many  families out looking for him, Brian the Snail, Buzz the Bee and Kevin, the Green Man of the Woods. If all this makes absolute no sense to you, please join us on Facebook!

The programme of events for 2021 is still provisional, for obvious reasons, but we will keep you posted.