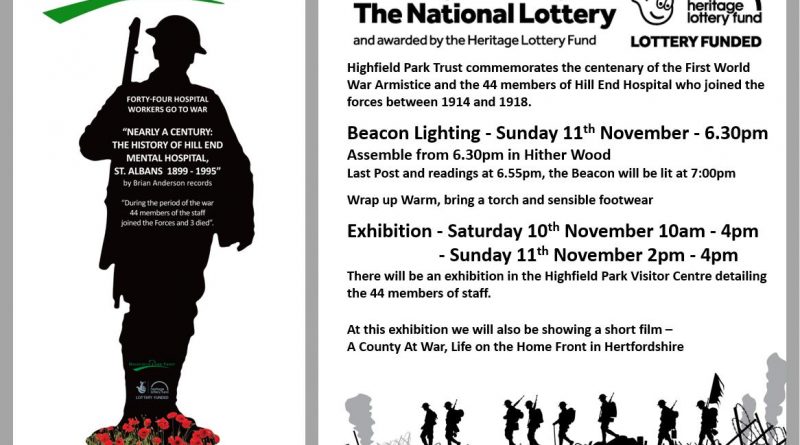 Awarded through the Heritage Lottery Fund (HLF), the first project will allow volunteers working with the University of Hertfordshire to catalogue and digitise the history archive. The archives have been built up over the last 10 years by trustees of Highfield Park, drawing on document research and oral history. The funding will enable greater public access to the information the Trust holds.

The second project, funded by the Heritage Lottery Fund’s: “First World War Then and Now’’ programme, commemorates the ending of the First World War, and the contribution that Hill End Hospital staff made. There will 14 First World War soldier silhouettes displaying information about the 44 Hill End hospital workers who went to war, lining the route to the commemorative beacon. The beacon will be lit on the evening of Sunday 11 November as part of “Battle’s Over – A Nation’s Tribute”. The silhouettes will then be on display in the Hill End Hospital Community Garden in Highfield Park from the 12th November – 19th November,  alongside a commemorative tree and plaque. The funding also enables us to create an exhibition at Highfield Park Visitor Centre giving further information on the role Hill End Hospital workers played in the war.

Early in 1915 the War Office said that at least 50,000 beds would be required for war wounded when the new armies went to the front.  Eight mental hospitals were to be cleared to receive some of the casualties but Hill End was not one of them.  Instead, the Committee agreed to receive 50 male and female patients from Norwich Asylum.  During the early twenties the hospital received many casualties from the 1914-18 War.  These would typically be suffering from shell shock or gassing.  For about ten years after the war these patients were looked after in Hill End Hospital.

One of Highfield Park Trusts objectives is “The preservation, protection, development and improvement of features of historic or public interest in the park.”  This National Lottery funding has allowed the Trust to expand on the work it has undertaken so far and share it with a wider audience.

Commenting on the award, Sue Gaylard, a trustee of some 15 years said: “We are thrilled to have received this support. Thanks to National Lottery players we are confident the project will preserve the archive for many years and improve access for people who are doing their own studies or want to find out more