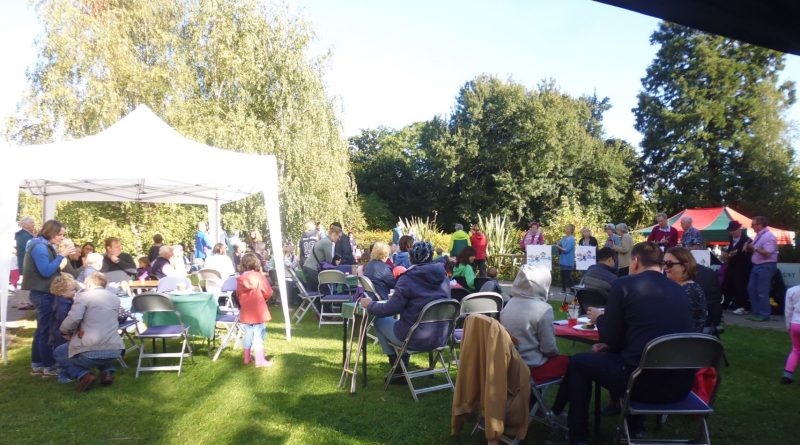 As Autumn slowly starts to creep in, our thoughts traditionally turn to Apple Day in early October.  By the time this newsletter reaches you, we will be very well advanced in our preparations and keeping our fingers crossed for another beautiful, sunny day.

As you can imagine, such events just don’t happen by themselves, they take a lot of organising by park staff and trustees alike.  This year is no exception. The format will now be familiar to you, with lots of things for the family to enjoy including our games area for the children, the ever popular apple café where you can buy refreshments, our apple stall, a local beekeeper, juicing demonstrations and the fabulous BSV Jazz Band who have entertained us over the last few years.

We endeavour to make this a real old fashioned family afternoon out and of course, entry is absolutely FREE although we hope that you support the Trust by buying copious amounts of apple juice, cake and other refreshments. For the first time ever, we will also have a few Highfield Park Trust branded items to encourage you to part with your money and support the upkeep of our tremendous park!

It is probably worth emphasising that all the proceeds go back into the management of the park and we can only run this event with the support of our amazing   volunteers. We are however, always grateful for extra pairs of hands on the day and if you feel you are able to help out, then please do get in contact.

Apple Day aside, we continue to work hard on the other objectives we set ourselves at the beginning of the year. Some of these, like the repair of the path by the Village Green are extremely obvious to everybody, but many more are not and relate to the general governance of the Trust or to the running of a specific event or another noteworthy project.

So, as you will have seen, we have finally been able to start repairing the path network, although much more remains to be done. We had hoped to secure funding to complete all of the Hill End side of the Park in one go, but that proved too big an ask.  As it was, this one section cost £24k, which puts the total project costs into perspective. We have made a start and are very pleased to have done so. Path renovation will remain on the agenda and Trustees will be discussing what we do next, but since we don’t currently have the financial resources to do much more, we may have to opt for a holding position until we can secure the necessary funding.

Elsewhere, we are close to completing a major piece of work that has been supported by the Heritage Lottery Fund. Over the last twelve months, Sue Gaylard, a longstanding Trustee has been working tirelessly with students from the University of Hertfordshire and more recently a local volunteer, Anne Hallman, to catalogue the extensive historical archive that the Trust now holds on Hill End and Cell Barnes hospitals. We now have so much information that we are hoping to mount an exhibition in the new museum in 2021.

In August 2018 the Trust office received an email from Richard Gregory living in New Zealand.  He explained that he, and his family in the UK, were doing some research trying to track their late father’s recovery in Hill End hospital from war injuries received in the desert in North Africa in WW2.

A date was arranged for the visit and Sue then set about collecting the documents, plans, photos and memories held by the Trust relating to the period when Bart’s were at Hill End hospital. The Gregory family  arrived at the Visitor Centre on Wednesday 14th August and spent the day studying the archives, reminiscing and giving an interview to the Trust.  Then a very wet, emotional walk around the grounds and housing estate at Hill End locating roughly where the wards would have stood.

Their father, Thomas Peter Gregory,  was born in 1915 and lived in Hendon.  In September 1942 he was admitted to St Bartholomew’s Hospital, with his leg literally hanging on by a thread and during the course of his time in hospital he was relocated to Hill End.

The Surgeons who operated on his leg were the late John Barron and John Napier and he was one of the first to be administered Penicillin.

The family were given a folder containing some of the Trust’s archives about Bart’s in Herts, and they in turn kindly donated letters, articles and photos of Thomas Gregory who by all accounts was a remarkable man.

As an aside, “Bart’s in Herts” will be the subject of our annual History Talk on 15th November.

In other news, David Williams has left the Trust to work on other challenges. He will be well known to many of you as he had worked maintaining the Park for six years. The Trust would like to thank him for his service and wish him well in his future endeavours.

This means that in recent weeks we’ve been a bit short-handed, although the team have done incredibly well to keep the Park looking as good as they have. There are many plans for the future, but first we need to recruit a new person into the team.

In other recent people news we were delighted that Dreda Gordon has now become a Trustee in a non-political appointment. If you know Dreda, you will know that she really commits to projects and we’re all looking forward to her future contribution.

We were also very pleased to receive a commendation for our new Visitor Centre in the community category at the recent Civic Society awards . We were pipped to the post as winner by the new Museum, but still quite an achievement! The Visitor Centre has also now been entered into another architectural competition, so again fingers crossed for a successful outcome.  I know I’ve mentioned this before, please consider hiring our meeting room if you can!

The younger audience has been accommodated with our annual Mini Beast Safari and on August 9th we will launch our first outside learning day and are already well advanced in the delivery of some exiting new activity packs, that you’ll be able to borrow from the Trust.

Our season of Nature Walks and Talks has now concluded for the summer, although our Bat Nights will run during September. Those that have attended have been rewarded by some very high quality events and we are increasingly being asked to run dedicated sessions for local Brownies, Cubs and Scouts. We’re very happy to oblige!

We have been pleased with our other summer events including the normal two Luna Cinema offerings (wasn’t BoRhap an amazing evening?) and this year, Opera Anywhere who put on an excellent performance of Pirates of Penzance. We are keen to  invite them back next year.

We have also hosted two ‘Ultimate Frisbee’ competitions and have been amazed at the skill and athleticism of the competing teams.

Lastly, over the next few weeks we will be conducting a short survey to understand your views on the Park and the work of the Trust more generally. If you are unable to complete an online version, paper copies will be available on Apple Day and at the Visitor Centre. Please keep a look out.

Enjoy the Park and hope to see you at Apple Day!